[et_pb_section admin_label=”section”]
[et_pb_row admin_label=”row”]
[et_pb_column type=”4_4″]
[et_pb_text admin_label=”Text”]
Statistics is a phrase that strikes fear into the greater part of the world, regardless of whether you’re a student or not.  The big question is why — why does statistics put the fear of God in even the average citizen?  Considering that the only “statistics” we see in our daily lives is “60% of Americans prefer milk over water after a slice of chocolate cake” what reason does it have to make us cower? 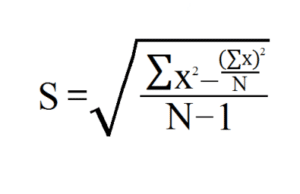 Does that picture scare you?  What if I told you that this is a formula formally taught within the first few weeks of an introductory statistics class?  It’s something called sample standard deviation, a measure of variance, or in more plain terms, a measure of how spread out numbers in a data set are.  Broken into its individual pieces, this formula isn’t intimidating and is actually on par with eighth grade arithmetic.  As you’ll see in many of my blog posts, the issue is with how it’s taught.

Statistics is mainly taught in Greek symbols, much like a majority of our more advanced math.  This in it of itself makes it more intimidating, but why should a few letters scare you away?  After all, we are in the modern day; the age where calculators are capable of taking the legwork out of any mathematical calculation.

Statistics in its truest form is simply the interpretation of the numbers derived from these kinds of computations.  It’s the analysis and conclusions made from these that actually composes the discipline.  As an educator myself, I hate to place blame on other educators, and perhaps the issue is deeper than that, but the way statistics is taught these days at the collegiate level inherently scares away anyone who might find even a modicum of interest.  As an aside, the amount of business statistics tutoring clients I’ve had that became intensely fascinated with this same discipline after a few lessons is astounding.  Taking a step away from it’s societal association with math, you end up with a pure science that has a lot to give people.  Many of my statistics tutoring students even after reaching their goals of simply passing, continue to take classes to explore the science itself.

The theory of statistics and it’s role in the world today (seriously, there isn’t a part of your everyday life that it isn’t involved in) is worth studying.  It’s far deeper than just equations, and even if it’s just a class for a semester, having a tutor alongside not only gets you to pass, but allows you to see this modern day role.
[/et_pb_text]
[/et_pb_column]
[/et_pb_row]
[/et_pb_section]

How Calculus Changes Between Schools
Why Are Online Math Classes So Difficult?
Excel and Statistics -- Why It's the Better Choice Over the TI-84
0 replies

Want to join the discussion?
Feel free to contribute!

Why Are Online Math Classes So Difficult? Excel and Statistics — Why It’s the Better Choice Over the TI-8...
Scroll to top